A year can be a long time in rock music, and Mallory Knox know it better than most bands.

The year between them recording debut full-length album, Signals, and actually releasing it had dragged by interminably. But the year that followed its January 2013 debut sped by – in the words of bassist Sam Douglas – “in the blink of an eye”.

It was a year crammed with achievements that quickly established Mallory Knox as the hottest new British rock band on the block. It saw the album crack the UK Top 40 and songs such as Lighthouse and Beggars storm their way onto discerning playlists everywhere. It saw them nominated for Kerrang! Awards and signed to Sony. And it saw them triumph at support slots with Don Broco and A Day To Remember, on their own headline tour and at festivals from Slam Dunk to the main stage at Reading and Leeds.

And yet, that phenomenal success was accompanied by such personal turmoil that singer Mikey Chapman describes it as “the very best andvery worst year of my life”.

The end result of hitting all those new peaks professionally, while simultaneously plumbing new depths personally, is Mallory Knox’s brilliant second album, Asymmetry. It was given its title, according to Sam, because “We’re the same people with the same attitude, but things are different now.”
And how. Asymmetry delivers on all of Signals’ raw promise; it’s the sound of a band spreading its wings while never losing sight of its core values. Recorded at Moles in Bath and Monnow Valley in Wales with legendary Pixies/Foo Fighters producer Gil Norton, it finds Mikey, Sam, Joe Savins (guitar), James Gillett (guitar) and Dave Rawling (drums) giving ‘difficult second album’ syndrome the swerve by taking Mallory’s trademark, anthemic rock sound in all sorts of new directions.

“This album sees us really develop as musicians and as a band,” declares Mikey. “The heavier stuff is more credibly heavy and the poppier stuff is more genuinely poppy. It’s an eclectic mix of everything we love musically.”

So the likes of A Ghost In The Mirror and QOD II – both of which helped the band trend on Twitter when Zane Lowe premiered them on his Radio 1 show – have more bite than Luis Suarez on a night out at an Italian restaurant. And yet Glimmer, with its folky guitars and dreamy melody is, in Sam’s words, “the most unusual song we’ve ever done”. Meanwhile, the seven-and-a-half minute, multi-faceted epic that is She Took Him To The Lake sees the band ascend to a whole new level musically. Sam describes the all-bangers-no-clangers collection as “the songs that we want to listen right now” and, this time, he’s likely to find that many, many thousands of people feel the same way.

The band, formed in Cambridge in 2009, were aware of Norton’s hard taskmaster reputation (“We thought, ‘He’s the man who shouted at Dave Grohl, so he’s definitelygoing to shout at us’,” laughs Mikey) before the sessions. Yet they forged an excellent working and personal relationship, the veteran producer constantly encouraging the band to experiment and cajoling them to thrilling new heights.

But, just when the album was really taking shape, disaster struck in the form of a fire at Moles. Thankfully, despite initial reports that the band were inside at the time, they’d actually returned home for the weekend.

More miraculously, all of their gear and their hard work survived unscathed. So, ultimately, the only things Mallory lost in the fire were their final inhibitions. Reminded of the fragility of both life in general and of any band’s existence, they decamped to Monnow Valley while Moles was restored and decided to really go for it.

So Asymmetry documents every last ounce of personal distress the boys have endured since their break-through in January 2013. Dare You, for example, was written in the immediate aftermath of a break-up that “absolutely ruined” Mikey. And Sam, while claiming not to have noticed quite how many tracks were about heartbreak until the record was finished, describes the album as “the most honest songs we’ve ever written”.

“One week would be the most enlightening, exciting and adrenalin-filled weeks of my life,” says Mikey of Mallory’s year in the fast lane. “But then the week immediately after would be one of the lowest points I’d ever seen. It sounds so emo, but some of it really was written through teary eyes.”

Such emotional commitment will no doubt be repaid ten times over when Mallory’s supremely passionate fanbase get to grips with the new material and these songs reach new ears all around the world.

Because Asymmetry is a supremely ambitious album, in every sense of the word. It’s destined to build on the recent British rock renaissance, connect far beyond these shores and make sure the name Mallory Knox soon means much more than just Juliette Lewis’ psychopath character in Natural Born Killers.

“We just want to keep climbing,” says Mikey. “I fear for the day when we sit back on our laurels and say, ‘I’m OK with where we are now’. We’ve got to keep developing, keep learning, become better musicians on every level. Don’t shoot for the stars and settle for halfway.”

Who knows precisely where another year will take Mallory Knox. But you can be sure it will be onwards and upwards. 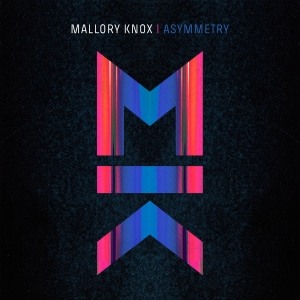