“This is our biggest sounding record and we’ve done it with our bare hands, just blood, sweat and tears the whole way.”

As dramatic as it sounds, Fightstar vocalist and guitarist, Charlie Simpson could almost be accused of underestimating the challenges the band faced during the recording of “be human”, their third album and first self-funded release.

After parting company with Gut Records, who released the band’s previous album, 2007’s “One Day Son, All This Will Be Yours” and the b-sides collection “Alternative Endings”, at the end of 2008, the band decided to release “be human” in partnership with their management company, Raw Power, on a brand new label – Search And Destroy. “The music industry is changing and bands have to change with it,” says guitarist and vocalist Alex Westaway, “We realised we needed to be in control.”

That new found control has extended to the recording of the new record. After working with Colin Richardson  (Funeral For A Friend) and Matt Wallace (Faith No More) on their previous two albums, the band opted to co-produced “be human” with long time friend of the band, Laruso guitarist Carl Bown. Simpson says, “We were incredibly lucky to work with two of the best producers in rock. We learned so much from them that it felt like the time to try doing it ourselves. Carl did an exceptional job.”

The bulk of recording for “be human” took place at Treehouse Studios, Bown’s studio, a small wood cabin in a field just outside Chesterfield in Derbyshire. Recording took place between August and December 2008, taking over seventy days in total – the longest the band has worked on a record so far – interrupted by touring and promotion. The record was almost not completed at all when drummer Omar Abidi broke his wrist almost halfway through the process.

“It was a full break, there was no touching bone,” Abidi says with a wince, “I had to have an emergency operation a week later to put two pins in my wrist.” Drums had only been recorded for six tracks – recording had hit a roadblock. But rather than recruit a replacement or delay recording, the band decided, as Simpson puts it, “to keep it in the family”.

Simpson immediately began training and took to the drum stool. “Omar wrote the parts and used me as the body,” he says. Abidi affably describes the situation as like “a director guiding a really good actor” and on one memorable occasion, the pair performed in tandem. On the album’s most incendiary track, Damocles, Abidi handled the kick and snare drums while Simpson played the rest. But while the band coped, the loss of Abidi’s powerhouse presence on drums was by no means easy. Westaway reveals how desperate things were: “We were running out of studio time. Charlie’s hands were bleeding but we had to get it done.”

But while recording was a physical struggle, “be human” was free of the artistic frustrations that dogged the band’s previous albums. Simpson says, “It was great to not have anyone breathing down our necks. With our second album [One Day Son, All This Will Be Yours] I didn’t like some of the mixes the label had done and all hell broke lose. Carl was the one who redid them. On this record, we’ve nailed the sound we wanted to create when we started as a band.” And what a sound it is…

“be human” grafts the group’s trademark gift for darkness and ability to write killer hooks with a newly developed cinematic sensibility. Bassist Dan Haigh says: “We’ve always wanted to transcend scene. We’re hoping the music reflects that. Our greatest influence in the last year and a half has been the music of [film composers] Hans Zimmer, Vangelis, David Mansfield and John Williams. Everything we’ve done musically has been about translating emotion in a filmic sense.”

To help them capture their vision of creating truly cinematic music, the band turned to celebrated arranger Audrey Riley (Muse, Coldplay). Simpson says: “Working with Audrey was a dream come to true. We had these ideas but she brought them to a whole new level. I sat in the studio thinking, how did we get to do this? It was an ambitious feat to get sixteen string players on the record.” Appropriately, given the band’s filmic inspirations, “be human”s strings were recorded at AIR Studios in North London, Hollywood’s home away from home when it comes to recording movie scores.

Working with a 16 piece orchestra was the culmination of one of the band’s biggest ambitions. Simpson says: “We’d always wanted to work with one. We grew up listening to albums like Silverchair’s ‘Neon Ballroom’ and knew how massive rock can sound.” But without the benefit of a label’s deep pockets, the band had to use their initiative to realise their grand ambitions. To record the heartbreaking choral harmonies on the anti-war lament, ‘War Machine’, Westaway and Dan Haigh returned to their alma mater Rugby School to rope in the Sixth Form choir. Simpson says: “We stole them halfway through their homework and set up a recording rig in the chapel. It was guerrilla album making.” Meanwhile the boys of Lichfield Cathedral Choir supplied the soaring backing vocals on the anthemic single ‘The English Way’. Simpson took on the role of conductor for the first time but found himself dealing with a slight language barrier: “They’re taught musical phrases from an early age and I was undermining all of that. It’s built into their brains to sing a certain way but they were brilliant.”

“be human” also finds Fightstar in a more positive place. Its title is a call to arms. Haigh says: “It’s about core human behaviour. Core morals seem to have been eroded in favour of the pursuit of material possessions and some kind of elusive cool.” But rather than focusing on the darker elements of life, Fightstar are trying to offer solutions and encourage their fans to ask questions. “This time our messages are wholly positive. There’s a lot of negativity around in society but we’re singing about coming together,” says Simpson.

And the triumph of “be human” is itself about a group of people coming together to create something great against the odds. As Abidi says, “Sometimes big budget records can really cloud things. When you have these constraints people are doing it for the love of music.” 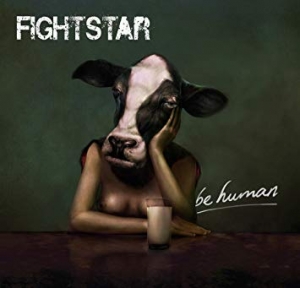