“The worst thing I could possibly do is be in a band,” says Mark Holley, with a dry laugh. “For my mental health, for my physical health… For everything, really. But something always drags me back to writing and performing. It’s like there’s something wired in me.”

One listen to Black Foxxes’ electrifying debut album and you’ll be glad Holley’s so helplessly compelled to make music. A righteous cocktail of energy, melody, dynamics and passion in service to Holley’s anguished, cathartic and ultimately uplifting songcraft, Black Foxxes is the sound of triumph over adversity, the sound of the strength of vulnerability. It’s raw, untrammelled, unmediated stuff – let lesser talents glaze over their shortcomings with gloss and distractions. Part of the power of this remarkable record lies in its purity, its simplicity: just the band, their instruments, their songs, and performances of lifetimes.

The songs started coming to Holley when he was only six years old. He’d already been playing guitar for a year, and would record himself singing and playing songs on his old Fisher-Price tape recorder, pretending he was headlining rock festivals. He’d grown up on his dad’s record collection: Neil Young, Hendrix, Oasis. Primal stuff. “I was obsessed,” he remembers. “It was all I was interested in. If it wasn’t for making music, I’d have no release.”

Holley formed an embryonic incarnation of Black Foxxes several years ago, but the band was just a hobby for the other two guys, so they were always fated to fall by the wayside with someone so impassioned in the leader role. Holley found true kindred spirits, however, in drummer Ant Thornton and bassist Tristan Jane, who he met on the Exeter and Plymouth gig circuit. The line-up change marked a new dawn for the group, a chance to start again. And new songs came quickly to Holley, as they always have.

“I just pick up my guitar and start recording a voice memo on my phone, and they come to me,” he says, of his process. Maybe that explains the songs’ emotional intensity, their searing honesty: Holley never sits down to consciously write these tunes, these words – they are delivered to him, plugged in to the live-wire that is his subconscious. “It comes out so emotional and intense because I’m not even thinking about writing,” Holley nods, “So whatever I’m thinking or feeling just comes out as music.”

Only weeks after their line-up solidified, the trio began recording a self-financed, self-released debut EP, which spread the word on this elemental, force-of-nature band further than their south-west origins, and set them on course to score a record deal. With an albums’ worth of freshly penned songs, they hooked up with producer Adrian Bushby (Foo Fighters, Muse, The Rapture) and recorded the debut album in two three-week sessions, one in Bushby’s North London studio, one in Middlefarm, a studio near their hometown, and miles away from anywhere else. The sessions were fast, unadulterated. Many of the cuts on the album were first takes, because that was where the spark, the emotion was. You can hear it in the recordings, which feel fresh and intimate, unforced and direct, the complex passion and heavy rock power flooding like from a new wound.

Holley’s lyrics are honest and from the heart. “It’s pretty clear what a song like I’m Not Well is about,” he snaps, and the album’s tales of overcoming obstacles and winning hard struggles are close to his heart and own experiences. Diagnosed with Crohn’s disease he suffers from severe anxiety, though he’s not allowed either condition to hold him back; indeed, you’ll half-suspect that, in truth, they’ve gee’d him further on towards his dreams. “It is what it is,” he says, of the songs’ subject matter. “They’re about illness, and being a kid. With my condition, I’ve had people say stupid shit. And there’s some things I can’t do, but what I *can do is write songs, and try my fucking hardest.”

Their every effort is audible on this naked, lacerating album: rock music that finds its power in its vulnerability, that never compromises its sincerity and honesty for trying to seem pretty, to seem perfect. Listen close and you’ll hear sweat dripping from fingers and onto fretboards, and drum-sticks begin to splinter. Listen closer still, and maybe you’ll hear your own synapses trigger, your heart beat faster. This is music that wears its anguish on its sleeve, but is never enslaved by it. This is music that is heroic not in its swagger, but in the truths it contains, expressed by a rhythm section that rolls with the grace and heft of a savage tide, guitars that lash and thunder like a violent storm, and vocals that scream and howl with searing, irresistible directness.

“There’s been so many times when I’ve wanted to quit,” says Holley. “But something inside me says, ‘No, this is exactly what you need to do.’ I think this is the only thing I’m good at. Every time I perform, I have this feeling, like, ‘This is right’, no matter the negative thoughts I have beforehand. I’m an anxious mess, and then I walk out and play, and everything is alright. It’s like I’m answering my calling. And then I walk offstage, and everything’s shit again. It’s like a drug, an addiction. You go back to normal life, and even though it was so hard, you just want to do it again.”

Friends as well as bandmates, Holley, Thornton and Jane share more than just a dream to ‘make it’ in rock’n’roll, but that dream is a big deal for them, and it looks like it’s all coming together. You sense they’re ready for it, that they can’t wait, that they want this and they want to make something important happen somehow. They have ambition, passion, a gift and an abundance of things to say. And they have enough hunger to make this all mean something.

“I want to push music back into the public eye,” says Holley. “Good, honest music, instead of generic crap. The dream is, we become the biggest band in the world, right?”

It’s not a bad dream. And with talent like this, it could even come true. 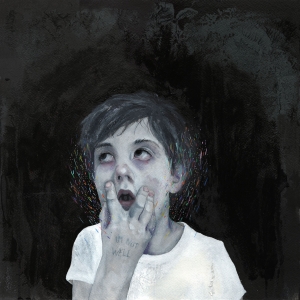