REFUSED join in the Record Store Day celebrations with a limited & unique vinyl offering; ‘Not Fit For Broadcast – Live at the BBC’ will be made available on ultra-clear12 Inch vinyl this April 18th as a limited run of 5,500 worldwide.

Featuring 6 exclusive live tracks recorded at BBC Maida Vale for the Rock Show with Daniel P Carter, ‘Not Fit For Broadcast – Live at the BBC’ features classics such as “It’s Not Ok” (from Refused’s 1996 studio album, ‘Songs To Fan The Flames of Discontent’) and “Rather Be Dead” (found on their generation defining 1998 LP, ‘The Shape of Punk To Come’), in addition to brand new classics “REV001” and “Malfire” from current album, ‘War Music’.

Pick up your copy on April 18th in your local indie record store, a full list of participating record shops can be found here.
SIDE A
1. REV001 2. Malfire 3. I Wanna Watch The World Burn 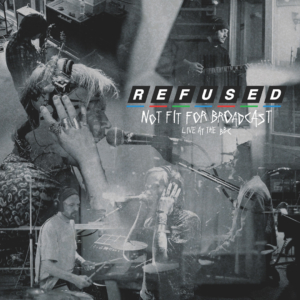 Not Fit For Broadcast