“To look into the eyes of a wolf is to see your soul. Just be sure something you want to view is there” – Unknown

Since their formation in 2008, the Bristolian riff-ragers have melted minds with their signature brand of patchouli-drenched punk rock fury. Their live rituals are the stuff of legend: a trapdoor into the cosmic beyond via the uncharted depths of your mind, sound-tracked by the red hot fuzz of crackling speakers and overloaded channels.

After wrapping up a hugely successful last year, which included headlining Live Nation’s ‘Download Freezes Over’ tour as well as crushing stages with chart-toppers Royal Blood, the quartet are set to unleash second album ‘Two Hands’ and excitement in the camp is infectious…

“We were doing it kinda ghetto before this point,” laughs guitarist Andy Ghosh. “We did the exact same thing in terms of recording and writing, but this time we’re a bit older and wiser. It’s just me and Chris making up weird shit! But this time round, we had the opportunity to produce it with Tom Dalgety [Band Of Skulls, Opeth, Royal Blood], who’s an absolute legend, and just really capture it. We have a hard sound to record: everything’s the same frequency just piled on top of each other. White noise, no… brown noise!”

Lead single ‘Rabbits Foot’ premiered on the Radio One Rock Show last November, before it was announced that ‘Two Hands’ would be released via Spinefarm Records under a new deal between Spinefarm / Universal and Search & Destroy. Everything feels like it’s slipping into place for what will undoubtedly be one of the most highly anticipated British rock albums of the year…

“Last year it felt like there was a shift,” enthuses front-man Chris Georgiadis. “We were getting played on more mainstream media – it almost feels like they’re up for a bit more filth now, which is cool. Before there have been times where I’ve felt our world wasn’t being represented. But we’re also big pop music fans, not necessarily all pop music, and we try to keep an element of that in what we do. It’s all about the hooks.”

“We just like cultivating great songs,” says Andy. “You know when a song comes on and you get a kick out of it – the structure’s right and everything clicks into the right place. Whether it’s pop or strange old acoustic ’70s folk stuff. It’s more about writing great music. The way we think about it is like a project of seeing how far we can push stuff, always trying to do something different, going against the grain purposefully. If we do something that sounds too much like something else… we do something else! It’s almost like a scientific experiment to see what is left in rock music that doesn’t sound like it’s already been done!”

“And that’s why it takes us so long!” laughs Chris.

Over the course of 2014, Chris and Andy began making scratch demos of the sounds in their heads, cross-pollinating the seeds that would eventually become the kaleidoscopic forest that is ‘Two Hands’. It’s a sentiment born of punk rebellion, an esoteric doomadelica manifested from real-life nightmares, but one that also leaves you doing the guesswork rather than handing over everything on a plate…

“Something we talked about before recording the album was making sure we had a clearer message,” says Chris. “But we did it subtly on purpose, we want the music to stand up on its own rather than be a vessel for messages, which there are more of on this album.”

“There are messages that need to be told,” agrees Andy. “Not to be preachy, but you see some of the shit kicking off at the moment that everyone’s aware of… Let’s just say it’s much less of a poetic trip with Chris’ vocals on this record. Things have changed, although our homes still become a weird laboratory whenever we’re making music. It’s like, ‘I’ve got this bit, what have you got?’ and eventually we mash it together like mad professors just to see what works!”

With the new line-up well and truly settled, including Blake Davies behind the kit and Lianna Lee Davies on bass, Turbowolf are sounding louder than ever. For Chris and Andy, who have kept the band going over the years, it’s important to have musicians on board who can deliver breathtaking performances on the big stages they find themselves on night after night…

“The fact that Blake is one of the best drummers around makes a huge difference,” raves Andy. “And Lianna’s really cool, with massive positive vibes. We’re in a good place right now, everyone’s got the same vision and super up for it. We’re the best team we’ve ever been.”

The timing couldn’t be more perfect: before embarking on their own headline tour, Turbowolf have been invited to perform all over Europe with recently resurrected fuzz rock lords Death From Above 1979, which Andy in particular is buzzing about…

“The fact that my favourite band are taking us on tour means so much,” he enthuses.

“We’re only really conscious of what we’re doing,” reflects Chris, “and we’re fortunate in being able to play in a lot of scenes, because our music is a marriage of all sorts of stuff. We used to go on stage at 3am at these electronica club nights in Bristol; everyone would be off their heads on all kinds of stuff and go wild ‘cause it was different but had that same pumping sound. We became that weird band you’d put on when everyone was fucked up. That’s where we come from…”

And there we have it. 2015. The Year of the Wolf. Or as they once were known, “that weird band you’d put on when everyone was fucked up”. 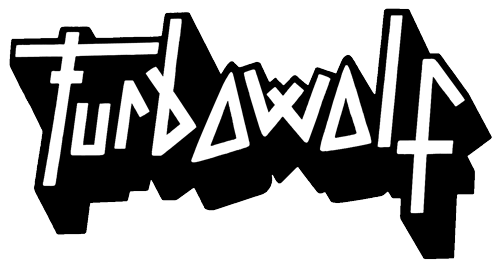 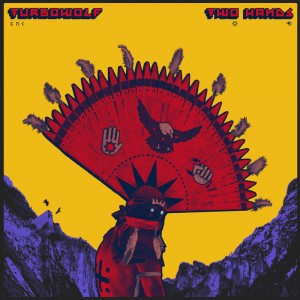